‘he’s aging so fast, and not so well’ she said.
she’s been letting the tears come, and then the frustration, and after that the desperate laughter.
she’s been saying goodbye, both consciously and not so consciously.
and in the process, she’s been weeding through the garden of her relationships.
she’s been sweeping out the cobwebs and saying what needs to be said.
she’s been expressing her gratitude, she’s been telling them to piss off.
she’s sharing her pain and allowing herself to be raw, laying it all out for the spring sunshine to heal.
she’s been feeling the age of holding it all in.

and so she said what has been sitting between us like a paper cut.
she found the courage – or was it the resignation – to voice what’s been at play there, that heartbreak twang of a country song unheard in the deserted strip mall parking lot.

the wounds were opened a bit, stretched out and slightly stinging, wanting to be washed.
we peered in to see what was there.
we found words, lots of them. there were lonesome words carelessly strewn about, and secret notes torn to shreds and impossible to piece together again. we found old dusty pictures of us laughing, and some of us hiding from each other. there were love songs, poems of mistrust and a rusted wagon that held our deep seated wish to be each other’s ‘person’. both of us sat there, poking at our noodles and wanting to take a spin in the red flyer once again. 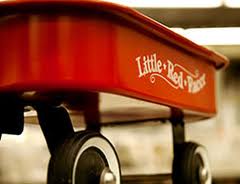 we felt vulnerable as we spoke our truths. we were talking to each other, yes, and also to our own hearts.

they had sensed it before we could, had offered a window into the freedom that might come if we gave ourselves (and each other) permission to expose the burden of our hurt. they didn’t talk to each other, yet they each told us the same thing. he watched the sadness and the protectiveness and knew that all we needed to do was talk with honesty and clarity. she whispered at first, and then let it come with more certainty. she knew that if we just let it out, if we just gave it up to each other, then we would feel better. they both knew we could love each other and hold each other and allow for each other’s truth without getting in the way. they knew before we did because they know how to hold us without getting in the way.

it’s been a long time of so much.
we rummaged through it all in those couple of hours.
we dusted off the dirt and found diamonds and lotuses.
we yanked at the weeds that had made thick roots and found that if we both pulled together, they weren’t so deep after all.
we dug into the dirt and found beautiful healthy bulbs that have kept us holding hands and we planted new promises…
to shed the old callused skin of protection,
to see each other,
to listen and hear our own songs,
to find the lovely harmonies we know how to make together, if we both give ourselves permission to sing.

it is our very own spring, our very own thawing.
becoming best friends is an afterthought – somehow we both know that we are already sisters and mirrors of each other.
we didn’t say it explicitly. the words weren’t spoken out loud because they didn’t need to be. we know now that what has the most value is this net we’ve decided to cast for each other. we know that if either of us chooses to jump, the other will catch us. we know that the bumps and bruises we will inevitably get along the way will be given time and space to heal.
we’ve decided to trust.
all we need to do is continue to put one foot ahead of the other and keep walking.

i am interested by life's simple intricacies. i am silence and noise. i am duality. i am a raw treat making, yoga teaching, dog walking lover of life. View more posts